Like all new mummy’s and daddy’s we were eagerly awaiting the arrival of our firstborns – due on Christmas Eve. Despite our very unexpected twin pregnancy everything was going along smoothly and we began to make plans and started to imagine our lives as a little family of four. But 10 years ago, on the 12th September 2008 our lives changed forever when we gave birth to our amazing boys, Oliver and Isaac 15 weeks prematurely. We were told by the Doctors to expect a rollercoaster journey and boy were they not wrong. Our first few days of being a first time mummy and daddy passed by in a blur of tubes, machines, ventilators, and very scary medical things which I’d  rather not remember. We slowly and reluctantly settled into life on the neonatal intensive care ward – beginning to care for our boys, taking the days literally minute by minute and living on a knifes edge. When one of our boys were doing well, the other seemed to be struggling and vice versa. I felt like I was being dangled upside down over a cliff edge by my ankles .. just waiting to drop.


And drop we did.

Despite getting off a ventilator first and seemingly getting stronger our beautiful little boy Issac’s condition deteriorated when he was around 9 weeks old. A few days later our hearts were shattered when we had to make the horrific decision no parents should ever have to be faced with. Despite the gallant efforts of the Doctors and nurses and the heroic fight of our little man, Isaac Harold Eaton died snuggling in our arms on the 19th November.  I skim over much of this period not because I have forgotten (far from it) but even now 10 years on it is painful to re-live.

Following Isaac’s death we had no choice but to carry on. Our other warrior Oliver  needed us. And despite wanting to crumble in the corner and climb into bed forever we ploughed on. More tubes, more machines, more surgery’s and lots of scary moments where we thought we were going to lose him. But miraculously after almost 6 months Oliver came home from hospital weighing  almost a whopping 7lb.

It is at this point now where many people believe the journey ends. But looking back now our journey was just beginning. Oliver had a lot of medical needs and he spent he first year of his life in 24hour oxygen.

The euphoria of making it home led me to trying to normalise and do the ‘new mummy’ things which some of my friends were doing around me. But we were fragile. Oliver physically and me mentally and emotionally. I quickly realised I felt like  we didn’t fit in. Nobody could possibly understand what we had and were going through. I was scared to speak to other new mums for fear of coming across too doom and gloom. I broke our in a blind panic when anybody every started the obligatory ‘how was your birth’ story. But I was scared to attend any special needs groups for fear of admitting to myself the obvious. I was in limbo and began to retreat.

And then I sat in a hospital waiting room for another appointment (the hospital was our second home) and I saw a poster for Little Hiccups. I remember ringing Linsay that night and speaking to her on the phone and she made me feel so at ease. I went along to my first Little Hiccups group nervous as hell. I needn’t have been. That was 10 years ago. Being part of a Little Hiccups finally felt like we belonged somewhere. In those early years being able to meet up with our little ones on a weekly basis was a life saver. I made friends and began to feel like we weren’t alone on this journey.

Over the years Oliver has received various diagnosis’s including cerebral palsy and autism. Our Little Hiccups family have been there for us throughout this. And as Little Hiccups has grown, so has our family (younger brother William and little sister Evie) and our biggest boy who turned 10 this year. His stubbornness and strength which in a way saved him in those early days are now creating new obstacles for us. Getting out and accessing activities and events with him is quite difficult, daunting and sometimes requires military operation and planning. Little  Hiccups have given us opportunities where we have benefited not only from ‘strength’ in numbers but also opportunities to participate in activities we would not have thought possible or not dared to try on our own. Nothing will ever compare to the happiness I felt seeing Oliver hurling down the dry ski slope attached to an instructor or seeing him relaxing and enjoying a canal boat trip. It is definitely the little moments, big memories. Thank you Little Hiccups; Linsay, Miriam and the gang for helping to create these memories and giving us he normality we so often crave xx

This week we have removed the stair-gates from two doorways[...] 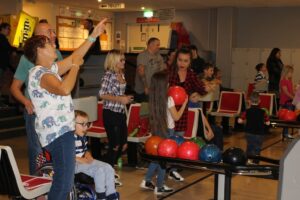 We’d had a few requests for a bowling event so[...] 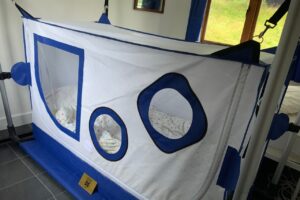 Accessible Travel Beds: Because sometimes you need a family break!

Going away on holiday – or even a short visit[...]