Home » Blog » May the force be with you.

It was certainly with us last Sunday when we visited the Comic Con in Bridlington to receive our cheque from Sentinel Squad (www.facebook.com/thesentinelsquaduk), who have spent the last two years fundraising for us. They were a little bit sneaky and wouldn’t tell us the amount that they had raised so that we would have a surprise on the day…and you know what? It worked! I would like to tell you…(drum roll please…) that they raised an absolutely, mind-blowing, life-changing amount of….

I mean…wow right? These guys went out every weekend and raised money for us. They stood out in all weathers, in a variety of places, taking photo after photo and asking for a donation. And they’ve never stopped (other than during lockdowns or when it was not advised!) As soon as they were allowed to fundraise, they were out their fundraising for us, despite all the risks to themselves.

Sentinel Squad UK is a Star Wars themed not for profit costuming organisation which raises money for various registered causes.

And they have never once asked for anything in return. In fact, Mark McFarlane from Sentinel Squad has actually said that they are “truly humbled we could help in a little way”. I think we can safely say – there is nothing little about what they have achieved for Little Hiccups.

Mark goes on to say: “It’s been a rollercoaster through the Covid-19 period from when it first struck in early 2020 in being able to continue our efforts in #TroopingToHelpOthers with many of our usual events being closed or cancelled. Finding troops once the restrictions were easing off in late 2020 was just as difficult, but being the Founder, Boss and steering the mighty star cruiser that is Sentinel Squad UK the crew/team members and supported charity Little Hiccups needed me to dig deep and put together what I could and where I could in safe environments another but necessary hurdle…thankfully a decent amount of events were sourced but with the added complications of Coronavirus many squad members couldn’t troop and still aren’t due to shielding this left a very basic skeleton crew. With 2 years support with only 16/17 months actually trooping at sometimes deserted shopping malls we managed to somehow raise an impressive £23,247.63. Hopefully moving forward we can achieve a similar amount within our usual time frame of 12 months for the new charity The Snappy Trust with all squad members making a return to the fold and joining the teams trooping help make a difference.”

They are truly special individuals.

And to cap the day off for us – we were treated to a fantastic venue and event for the Cheque handover – the Bridlington Comic Con. We were lucky enough to meet Darleks, treated to amazing art, costumes and stalls. All of which was set in the beautiful setting of Bridlington. And thank you to the families that were able to drive to join us for the day! We hope you had a great day too.

Linsay, the founder of Little Hiccups, has said that the amount was “incredible and in such a difficult climate! They’ve done us very proud and it will make a huge difference and create a lot of smiles and memories.”

So guys – our mission (and yours!) this year, is to have a great time with the funds they have raised us and to reach out and support more families.

But all good things must come to an end. And Sentinel Squad’s aim is support one charity a year. We were lucky enough that due to Covid, that we got them for two. Sentinel Squad have picked the new charity, Snappy, for this year’s fundraising – and they sound fab!

Snappy have been running in York for 36 years and support families who have a child or young person with wide ranging abilities. They are definitely worth a checkout: 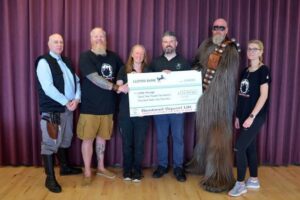 A group of ‘Star Wars’ enthusiasts who dress up as[...] 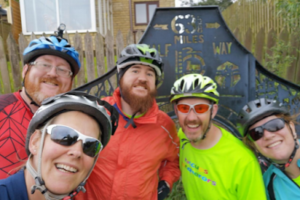 The Show Must Go On

I'm not going to lie...there was a lot of discussion as to whether we should continue this Christmas Party. There was a lot of monitoring the news for updates and a lot of sleepless nights weighing up the pros and cons of going ahead or cancelling.